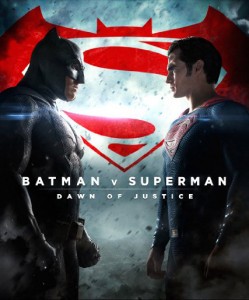 After witnessing the battle between Superman and General Zod in Metropolis, Bruce Wayne takes it upon himself to ensure the Man of Steel isn’t a rogue alien who might one day enslave the human race. In the meantime, Lex Luthor has sworn to ensure humanity’s survival by securing for himself Kryptonite, which is later discovered to be the one thing that can weaken Superman. Worse, Luthor has a secret project tracking metahuman activity across the globe, which prompts Diana Prince to obtain the confidential data he has on her. To complicate matters, Luthor has also acquired the body of General Zod and creates from it an unstoppable killing machine—Doomsday, a being more powerful than even Superman. It’s going to take Batman, Superman, and Wonder Woman to take down the beast lest the city—even the planet—is destroyed by this destructive force.

Okay, this is a first impression review, with some processing time after.

Batman v Superman is a comic book movie, and not in the campy sense. It has the feel of DC’s direct-to-video animated features and there’s an atmosphere to the movie that superheroes belong in the world created.

The downside to the flick is it doesn’t work as a stand-alone film. There’s no strict A to B to C to the story. It’s more an introduction of story elements that will all play out in future DC movies instead. It’s like the first part of a giant graphic novel, and it is my hope that years down the road when all the other DC movies are released, what we will have is one massive story instead of what is usually given to us in today’s superhero flicks: each one a self-contained tale with subplots running through them that culminate in team-up adventures. If indeed DC’s plan is to make one giant movie, then that’s something never attempted before and never in the superhero genre. If this is the case, that’s brilliant and should be applauded. It’s jarring for moviegoers, but once they catch onto what’s going on, they’ll no doubt be amazed. After all, we do like our epics both on the big screen and TV.

Superman/Clark Kent. Once again, Henry Cavill delivers as the Last Son of Krypton. In fact, I think his performance is a step up from his previous outing in Man of Steel. That first flick was about Superman finding his footing, and while there is still some of that here, it’s more about the world finding its footing now that Superman is on the scene. You can tell Superman has become a beacon of hope to the world despite how some might view him as a threat. He’s bigger, stronger, and carries with him that air of awe and wonder Superman should. We’re not supposed to relate to this god-like being, but instead look up to him as something and someone to aspire to, and Superman is very much coming into that form as the flick goes on. As for the Clark Kent side, reporter Clark in this flick was pretty much just Average Joe. There wasn’t all that much involved in creating a clear line between Superman and Clark Kent, that strong sense of two separate people. I wish there was, but I also see how Average Joe works better in the reality established in these movies than someone who’s an over-the-top nerd. At the same time, it would’ve been nice to see Clark trip over his own feet or bump into a desk or something to really give off that whole there’s-no-way-this-guy-can-be-Superman thing. There was also one scene I had so hoped for in this movie that never came and that was the classic Clark ripping his shirt open to reveal the S. Perhaps in another movie.

Batman/Bruce Wayne. When Ben Affleck was cast, I got behind it right away. I’m an Affleck fan and knew he could deliver on what would be a worn-out Bruce Wayne, which would eventually give way to a worn-out Batman. What can I say? Affleck did a superb job. He did the playboy thing—though he could’ve played up the douche bag part a bit; yet at this point in his life, a cocky playboy might not be in the cards for him—and also did well when it was just him and Alfred. As Batman, this is the Batman we’ve been waiting for. Finally, oh finally, we got to see the comic book Batsuit and a Batman who’s fighting and action was the stuff that made the Arkham games so darn good. He also played the detective, which was never really in the other movies. And the bat-atmosphere? That part where he’s hanging in the corner in the dark and the light shines on him? Spooky and gorgeous. I also enjoyed the final fight and how Batman was portrayed. His limits as a human being with gadgets was shown, which is good, because I’m tired of stories where Batman somehow saves the day instead of the beings that are so much more powerful than him. I’m really excited for the forthcoming Bat-flicks with Ben Affleck in the lead.

Diana Prince/Wonder Woman. Small hero part in this movie, comparatively speaking to the two male leads. As Diana Prince, Gal Gadot was mysterious and intriguing. There was also a sense of detachment about her which, once you learn who she really is, makes perfect sense since she’s from Themyscyra. When the Wonder Woman reveal happened, she stole the show. Sorry Superman and Batman, you were outshone big time. She had a heroic entrance—which is so important in superhero movies—a killer score, and was completely badass when she got down to business and helped in the fight against Doomsday. What was also interesting is while the movie didn’t get too much into who she was, she stilled carried her own weight and felt fleshed-out anyway. Of course, this could all be in my head since I know who Wonder Woman is and enough of her backstory to fill in the gaps. With the Wonder Woman movie in production as of the writing of this review, I know I’ll be one of the first in line when it comes out. She was that good.

Lex Luthor. If Jesse Eisenberg is good at one thing, it’s playing the prideful I’m-smarter-than-everybody-else-in-the-room guy. And, yeah, that’s who Lex Luthor is. He’s a genius, and despite what he tells the public, has a contempt for humanity because he thinks he’s above it. Of course, the paradox is that he himself is human. In that regard, Jesse Eisenberg did a fine job. However, I still feel he was too youthful for the role since Lex is older than Superman in other incarnations, and Lex—as crazy as he can be sometimes—is more of a reserved crazy than someone more animated. It was this animated part that brought Lex down, in my opinion. Crazy is fine. Smart crazy is even better, but this kind of Joker-esque displays that happened now and then were out of place. Maybe given the ending Lex’s personality will change and he’ll be more reserved. We’ll see.

Lois Lane. Amy Adams works for me. She does the hard-nosed journalist thing quite well, and the standard Lois Lane thing of getting herself into hot spots so only Superman can come to the rescue. I don’t mind this trope so long as it isn’t all the time. Her role in this flick wasn’t a main one like in Man of Steel. She was more part of Superman’s support team despite her entanglement in some of the later conflicts in the movie.

Alfred Pennyworth. What can I say? Jeremy Irons did a good job as Alfred, who is also Batman’s co-combatant. Sure, he didn’t don a costume and get out there and fight bad guys, but helped Batman from the Batcave as a sort of special ops overseer. More importantly, he acted as Bruce Wayne’s conscience and wasn’t afraid to go up against him when he disagreed with something. As much as Robin’s job is to keep Batman grounded, it’s Alfred’s job as well, and since he is older than Bruce, he can provide wisdom in areas Bruce isn’t familiar with. Good choice having Jeremy Irons in the role.

There were a few moments in the film where I wished things had gone in a different direction, but that could just be my taste as opposed to my ideas being better.

Unfortunately, WB and DC marketed this movie as one thing and what it was was something different. Once you get over that hurdle and see Batman v Superman: Dawn of Justice for what it’s meant to be in the greater DC Universe, then a lot of pieces fall into place and it’s highly enjoyable.