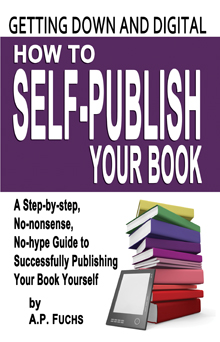 6. Long gone are the days of just writing and nothing else.

Like I said before, unless you catch a break or find yourself in Amazon’s “also bought” loop and bestseller lists, you’ll have to market your work. This goes beyond just having a website and telling your friends on Facebook and Twitter about it (though those items are a good start). Even if you score a traditional deal, you’ll need to put in the time to market your work until you have such a large fan base you know they’ll pick up everything you write regardless of what it is and all that’s needed is an announcement.

A suggestion is to dedicate at least one day a week to marketing or, if you can spare it, do a minimum of two things a day to tell others about your book, two things that involve both the on-line and off-line worlds. Marketing on-line is harder, actually, because you’re competing with so many more voices. Local off-line marketing is much easier—unless there are two hundred thousand authors all shouting about their books in your local bookstore.

It takes time. It takes work. But that’s what it takes. Simply uploading your book to one or two platforms doesn’t cut it anymore.

7. Utilize both the on- and off-line worlds.

It’s easy to fall into the trap of focusing solely on on-line sales. I’ve seen it, I’ve lived it, and I’ve had good times and bad times with it.

Like I said about diversifying, you need to be both on-line and off-line with your book.

My book, Getting Down and Digital: How to Self-publish Your Book, walks you through both processes step-by-step with your average self-publisher’s budget (a few hundred bucks). It gives a well-rounded approach to publishing and emphasizes using both the virtual and real worlds.

I will admit, however, there is an on-line bias and that’s because of the off-line world’s system of book returns. You can be in every bookstore in every country, but unless your book sells and stays sold—bookstores allow customers to return books after all—you face the potential nightmare of having a ton of books returned to you at your expense.

At the same time, off-line sales pose the chance to make a good buck per book. Like I mentioned about my convention experience—and I’ve been doing conventions steadily for seven years—I net $8-10 a book. Can’t do that on-line because even books sold through on-line retailers require the retailers get a cut.

The following should be part of a self-publisher’s arsenal on top of on-line sales through the usual suspects, whether those on-line sales are for eBooks or paperbacks:

A lot of writers struggle with cash. I totally get that. I was once homeless because of me chasing this dream and have lived close to the breadline a few times as I pursued it. It’s hard when you look in your cupboard and there’s not much there and you have a family to feed. It’s hard when part of your income is walking back alleys looking for beer cans to cash in. I fully sympathize with any writer struggling right now and those who have struggled. However, the one thing that has always been consistent is it costs money to publish whether one is struggling or not. You need to either save up, work a few extra hours at the day job, get a second job, sell some stuff, do pre-orders or something else to raise capital.

Some people you’ll need to pay:

It costs money, too, if you want to get in books for events, signings and other things. However, you can quickly make it back if you get in small quantities like, say, twenty books a pop. (i.e. print books at $4 a book, sell them at $15. I’ve made back my $100 printer bill and then some after the tenth copy sells. Copies eleven through twenty are all gravy.)

9. Stick to your own thing.

Like I mentioned earlier, trends come and go. Recently, there was a huge zombie boom in literature and doing zombie books was like printing money. Now that bubble’s burst and the sales aren’t there like before. I know this from personal experience and from talking to those in my publishing circles.

Vampires were huge for a while and those books were moving like crazy. Now, not as much on the whole. Urban fantasy is the new thing. Those are moving like hotcakes at the moment. But you know what? That’ll change, too, so unless you’re willing to write whatever is hot at the moment, you’re better off just writing what you enjoy. While it’s true some genres sell better than others (i.e. romance has always been a solid seller), you’re better off just doing your own thing. Your joy in writing whatever your genre is will come through on the page and make a better book. You’ll build your brand as “that guy/girl who writes thriller/mystery/superhero/weird” fiction and will develop your following of readers who love that stuff as a result. That’s the trick: finding that niche market of readers who’ll support you for each release. The goal after finding them is to grow that group and sticking to one or two genres goes a long way in making that happen.

If your genre isn’t hot right now, odds are it will be at some point. I never thought I’d see the day when superheroes were all over popular culture. Thanks to Marvel’s efforts at the box office—and if DC gets their act together, them too, and Man of Steel was a sign their new shared universe is off to a good start—they’re everywhere, more than at any other point in history, and it’s put a spotlight into my main genre: superhero fiction (The Axiom-man Saga). Good deal for me. I stuck to my thing and now it’s poised to pay off.

Nothing kills creativity like discouragement. When we first start out writing, we’re all gung ho and looking to make a career. We’re hungry for it and sacrifice anything to get it—I was homeless trying to make this happen, remember? Sometimes success comes right away, other times you got to toil away for years and years. Look at J.A. Konrath. He put in around twenty years before things really came together. I’m sure there were times the fun stopped and, dare I say, he even considered quitting. But he didn’t. He made it work, made it fun and kept on going. Now it’s paid off.

Writing is an art form above all else and there are many writers who never catch a break and just toil away at it their whole lives. They’ll say it’s because “they can’t help themselves but write,” but what does that mean? It means they’re having fun regardless of payoff. Writing is a source of joy for them and completes them in some way. Whether you publish or not, there needs to be a fun element. Very, very few writers write solely for money.

Publishing should be fun, too, even if success doesn’t happen right away. Transforming a book from a manuscript into an actual book with two covers is also an art form, a fun art form, and should be part of the joy of creating something from nothing just like writing the story is. In fact, it’s becomes highly addictive after a while.

Writing should be about honesty and good times. If it’s not, why bother?

Anyway, thanks for reading my Top Ten List of Truths for Self-publishers. There are more, but these are the big ones. Others can be found in my book, Getting Down and Digital: How to Self-publish Your Book, which walks you step-by-step through the publishing process for print and eBooks, formatting, cover design, marketing and more. It’s an entire self-publisher’s education between two covers, one that covers multiple eBook and paperback markets, and is meant to be the ultimate go-to guide for the career indie author.

📂This entry was posted in Self-publishing 📎and tagged BadRedhead Media book Facebook Getting Down and Digital: How to Self-publish Your Book marketing money Publishing self-publisher Top Ten List of Truths for Self-publishers Twitter website Writing